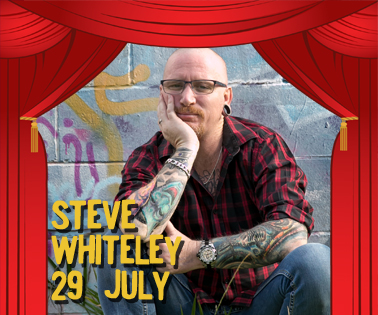 *An ace up his sleeve at every turn* The Courier Mail
Steven J Whiteley began performing in Adelaide in 1996. Since then he has toured everywhere in and around Australia and overseas. Nicknamed “The Bogan Prince of Australian Comedy”, he has performed with the likes of Stephen K Amos, Ed Byrne, Adam Hills, Steady Eddy and Jimeoin, to name just a few. He now performs extensively on cruise ships around the world, but likes to tour Australia when he’s back on home soil.
He has recently released his second DVD titled “You Can’t Say That” following the success of his 2012 release “and another thing”. His natural storytelling ability makes him a crowd favourite as he recounts personal experiences and observations of everyday life.
Quite simply, he’s not to be missed.
*His stories will leave you in stitches long after he’s finished telling them* The West Australian
MC – Gearard McGowan
Supports – Alex Jae + TBA