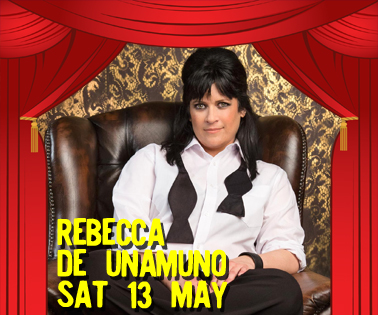 “De Unamuno’s exquisite talent for creating characters on the spot, as well as narrative to sustain them, is something to see” – The Age

Rebecca De Unamuno is an actor, improviser, stand-up comedian and voice-over artist.
She has appeared on many television shows including Just For Laughs Australia, The Glass House, Big Bite, The Chaser’s War on Everything, Kath & Kim, Comedy Inc – The Late Shift, and Talkin’ “Bout Your Generation.
On radio Rebecca has been guest co-host of Triple M Breakfast, Tom and Subby, The Shebang and is a regular guest on Thank God It’s Friday (702 ABC Sydney).
Rebecca has performed comedy and improv for the past 20yrs at various venues and festivals throughout the world including Just For Laughs, Edinburgh Fringe Festival, Adelaide Cabaret Festival, The Sydney Comedy Store, Enmore Theatre, Belvoir St Theatre, Melbourne International Comedy Festival and New Zealand Fringe Festival. Rebecca has also toured nationally three times with Seinfeld’s Jason Alexander.
Rebecca is a two-time Cranston Cup Champion and was a member of the Australian team which won the Improv World Cup at the 2001 Just For Laughs Festival in Montreal. Rebecca was the first woman in the history of the competition to be named Player of the Tournament.
“it’s like watching a magician and wondering what the secret to her craft is” – Impress Magazine
MC –
Kyle Legacy
Supports –
Bec Charlwood
Suren Jayemanne