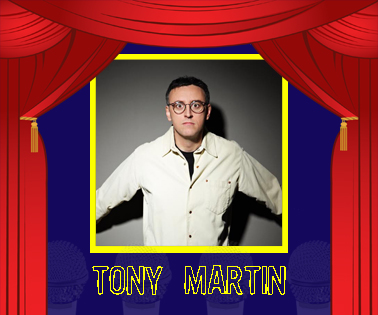 Tony Martin was born in Te Kuiti, New Zealand, in 1964, and has spent over half his life in Melbourne, Australia, writing, directing, producing and performing all manner of nonsense.
His credits include The D-Generation, The Late Show, Martin/Molloy, Get This and the video for John Farnham’s ‘Seemed Like a Good Idea at the Time’. He is the author of three books and four angry letters to the ‘Green Guide’. He is an ARIA winner, Barry nominee and shares a name with the fastest rider in last year’s Tour de France. He appeared on Kath & Kim and Thank God You’re Here, and is in The Castle for nine seconds. Nine long seconds.
More recently, he has produced and hosted two series of A Quiet Word for ABC1; written and directed episodes of Upper Middle Bogan; assisted Ross Noble with the birth of his first-ever UK TV series, Freewheeling; and had lunch with Sam Pang.
His 2013 Melbourne Fringe Festival show, The Yeti, opened to rave reviews and closed to even better ones. He still does stand-up comedy, and is by far the most popular of the 287 Tony Martins on Twitter.
Doors for 8pm / Show 8.30pm
+ Google Calendar+ Add to iCalendar